Valve unveils the Steam Deck, aka the PC version of the Nintendo Switch

Valve unveils the Steam Deck, aka the PC version of the Nintendo Switch

While Nintendo has unveiled its Switch OLED, PlayStation has for the moment stopped fighting in the handheld segment and Xbox has declared that it will see to create “nomadic” devices in the more or less near future, it’s Valve that unleashes a new device without warning.

The Steam Deck is a portable device (a PC) that is shaped like a Nintendo Switch. The principle is simple and has been a gamer’s dream on paper for years: play your Steam library anywhere, with a compact, powerful and cheap device.

The Steam Deck features a 7-inch screen (LCD, not OLED), a 2h to 8h battery depending on use, and the ability to run all the games in your Steam library directly in the console (not in the Cloud).

It is interesting to note several points: in terms of format, everything seems to be really well thought out. You have the 4 classical high triggers, but also 4 lower triggers (in the idea of the Xbox Elite controller). There are also trackpads just below the sticks to be able to direct the mouse more precisely on the screen for example.

A 16:10 screen, HD haptic feedback, but above all the presence of a dock (to be original). What’s practical with the dock is that you can connect the Steam Deck to a TV/screen (HDMI 2.0 and Display port 1.4) to be able to play games but also use the device as a PC.

Because at the end of the day, it is a PC on which you should be able to install any application, browse the Internet or watch videos.

What’s interesting now is how the Xbox Cloud app will work, for example, to see if we’ll be able to play Xbox games via the Cloud on Steam Deck. Only time will tell.

With a release date of December 2021, the Steam Deck will be available for pre-order tomorrow, with prices starting at €419 for 64GB. You’ll need to upgrade to the £549 or £679 versions for larger internal memory, 256GB and 512GB respectively.

The fact is that the Steam Deck can read microSD, so we can easily increase the memory of our console/PC. 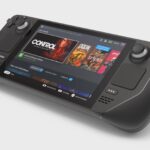 A PlayStation 5 made of LEGO? It's over here!

Mario treats himself to a limited edition Tag Heuer watch