13 years ago, on September 25, 2007 in the world (the 26 in Europe), Bungie put an end to the saga which had thrilled 2 generations of “Xbox players”. The Master Chief had accompanied Microsoft when it entered the world of video games and 6 years later he bowed out.

It was indeed what we expected, and what the end of the game hinted at. Obviously, if we watched the famous post-credits cutscene, Bungie was leaving a door open for a possible return of the Spartan. It only remained to wake him if we needed him.

Thirteen years ago, Halo was a small monument in video games. Sales that literally break the shackles in the USA, placing Halo 3 at the top of the best-selling games that year (ahead of Wii Play and Call of Duty 4: Modern Warfare). In 2012, Microsoft announced that the game has sold more than 14 million copies in 5 years.

And to launch the marketing campaign of the game, Microsoft and Bungie had put the dishes in the big ones by offering to the fans a video entitled “Believe”. A giant diorama that has since been dismantled in several parts scattered in emblematic places (Bungie, 343 Industries, Microsoft Studio D, …).

He offered us to discover the ultimate fight of the Master Chief, in a scenario as if we were in a museum, where each fighter was represented to show us the extent of the fight.

But the campaign did not end there. It also offered a series of interviews with soldiers sharing the details of this historic moment in the history of Halo. A real gift for fans who could benefit from this highlighting of the lore as we rarely see.

It is a realization of the 215 McCann agency to which also owed the campaign for Halo Infinite that we discovered during the Xbox showcase (we also talked about it recently).

Thirteen years later, both old and new generations of gamers can rediscover the entire Halo saga once again on Xbox One (and soon on Xbox Series X | S), either with the original game they bought. at the time or with the Master Chief Collection. 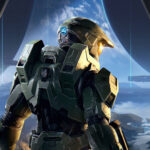 A The Witcher 3 parka to be well this fall