September 26 is a day to mark with a white cross for players of The Last of Us because it is the day where it all starts. In the game, it’s the day the contamination started and the story of Ellie, Joel and Abby was shaped little by little.

It has become in the real world a day of “celebration” for fans of the license since the release of the first opus in 2013. Long known as Outbreak Day (the term of the game), it will now be called The Last of Us Day. A decision taken in relation to the news and the pandemic that affects us all.

This TLOUDay is the perfect opportunity to unveil goodies, gifts and more, all in one place for fans to find their happiness.

We were therefore able to discover a free dynamic theme for PS4 inspired by the end of the game, a vinyl with the music of the game composed by Gustavo Santaolalla and Mac Quayle with original illustrations by Ellie and Abby (available as posters), a guide to cosplay for Abby but also 2 Ellie statuettes which are the same as those already released which we had spoken but much larger. The previous ones being out of stock forever, you should jump on this one before it’s too late.

That’s not all ! There is also a double Ellie and Joel figurine at Mamegyoirai which is composed of two small figurines sold separately. Place them side by side for the perfect diorama. Finally there are various and varied goodies and clothes (especially tee-shorts in fact). There’s even a board game that’s in development.

Without forgetting this magnificent illustration of Yoji Shinkawa, essential artist who joined Kojima Prod and who is famous for his work with Hideo Kojima on Metal Gear Solid.

You should find what you are looking for if you enjoy the license. Good weekend to all. 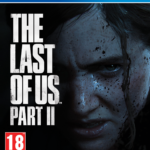 20 Double Fine Years , the book that tells us the story of the iconic studio