Death Stranding ringtones in mp3 for its release on PC

Death Stranding ringtones in mp3 for its release on PC

The last baby from Hideo Kojima’s studio will be released on July 14 on PC after having hit the shelves last year on PS4. If the game was not appreciated by everyone unanimously, it has at least fueled endless debates. As far as I’m concerned, this is without a doubt the game I spent the most time on in 2019.

So that the release of Death Stranding does not go unnoticed, the studio will offer an “improved” version of the original experience with, among other things, the updates received by the PS4 version, improved graphics, a new difficulty mode and content. exclusive in partnership with Half-Life.

To celebrate, the editor offers you to download dynamic wallpapers and ringtones. You will be able to have the same sound as an SMS ringtone as when Mama sent us a message.

Death Stranding PCPS4PS5
News Amazon Micromania
PCPS4 Death Stranding
The game is set in an apocalyptic United States, where a cataclysmic event known as the "Death Stranding" caused "Beached Things" invisible creatures originating from the "Beach", lands thought to be unique to each person that are typically visited during near-death experiences and are said to be the link to the afterlife—to begin roaming the Earth.
Date: 08/11/2019 | Genre: Action | Dev: Kojima Productions | Edt: Sony Interactive Entertainment
Buy on Amazon More posts 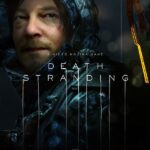 Review / Death Stranding : a work of anticipation with gameplay that divides

#MeToo: testimonials of sexual harassment in the video game industry are increasing