The Insomniac Games dream team is back less than a year after its last hit with a new episode for the Ratchet and Clank saga.

For once (I seem to say this for each of my tests in a different context, I’ll let you check), this is a PlayStation 5 exclusive game. Indeed, unlike Spider-Man Miles Morales which was released simultaneously on PS4 and PS5 with different graphical modes, Ratchet & Clank: Rift Apart was only released on Sony’s latest console.

A choice that may seem questionable (a bit like Demon’s Souls) given that the game does not only rely on the graphic quality it offers (and obviously the feature to switch from one world to another, which we’ll talk about later).

Ratchet & Clank: Rift Apart will make us visit exotic and original worlds where the fauna and flora will be diverse and varied. It is undoubtedly one of the strengths of the game to allow us to fly in imaginary universes as we rarely meet in the video game.

It’s a colorful adventure, where you’ll have to alternate platforming phases and “fierce” fights in environments full of visual details.

Semi-open” spaces with an unequal richness of movement but always sufficient for us to stroll at our convenience.

The music that accompanies us easily takes us into this funny and dynamic adventure.

The story of Ratchet & Clank: Rift Apart can be enjoyed even if you haven’t tried the previous installments. This is a good news because the only episode I played was the last one on PS4 and I had lost interest because of the pace of the game.

This new game takes us from the beginning in an alternative dimension to that of Ratchet (the Lombax hero) and Clank (the almost robot hero). The twist is that in this dimension, our sworn enemy that we defeat every time is the emperor.

When we arrive in this first level, our two heroes are separated. We will quickly meet Rivet, the “female version” of Ratchet in this universe.

The game will then offer us a series of planets to explore where we will control either Ratchet or Rivet to complete our missions. Both heroes are visually stunning and we understand that this level of detail is only possible on PlayStation 5.

It’s again a visual wow effect, like we have at each console generation change.

Rivet is not just a copy of Ratchet that has been repainted in blue, she is a completely different character and the story will tell us this quite quickly. Her face is thinner and more expressive, she has a robotic arm and she doesn’t have a companion to accompany her in her daily life.

Besides, she is not the heroine of this dimension, but rather she represents the resistance.

Let’s go back to our space exploration. Ratchet & Clank: Rift Apart makes us visit several planets which are as many different environments. We will have the chance to walk through the jungle, a rocky desert, an aquatic world, a space volcano or a city district.

The sceneries are superb and their details fill our screen. The old school exploration system will put on our way groups of enemies that are waiting for our arrival to fight (and get beaten too).

For these inevitable fights that punctuate the game, our two heroes have an impressive arsenal. We must admit that if the games where we are offered weapons are legion, R&C RA offers us here original and shifted means of combat.

In addition to a “machine gun” and a “shotgun”, you will have to rely on more eccentric weapons that fit well with the game universe and are perfect for fighting. The topiary sprinkler turns enemies into flower beds. The lightning rod sends lightning bolts at the enemies, electrocuting nearby opponents. You can also send a small drilling robot on your enemies, or call for help from small temporary companions to fight with you.

It’s quite varied and completely crazy, and the fights quickly become chaotic because we have fun changing weapons constantly to adapt our strategy.

Quite cleverly, the game “pauses” when the weapon wheel is displayed to select our next equipment, allowing us to choose quietly to make a spectacular and improbable fight.

To add a little interest to these battles and to renew them, you will have to collect bolts and other parts from the crates you destroy and from the enemies you fight in order to buy new weapons and improve the ones you have.

Each weapon has two shots that can be activated with the help of the DualSense adaptive triggers. A partial press engages the single shot, a full press the full shot. It’s a good idea, a bit like Returnal, but you end up never using the second trigger to aim. By giving two functions to the same trigger, you completely forget the interest of the second one.

The controller offers us vibrations according to the damage our heroes suffer and especially according to the weapons we use. It’s not transcendent during the fights (since it’s a mess) and I didn’t like the trigger resistance on some weapons at all (when you have more than 10 weapons, having to remember how much pressure to exert on the trigger for each one is not in the “entertainment” box).

The enemies you meet are also varied but never too complex to beat. The bosses’ patterns are not too complicated either, and this is a good thing because there would be no point in spending 15 minutes on a boss in a game where skill is not essential.

Our heroes discover useful skills for exploring the game and fighting during the adventure, whether it’s the ability to slide on the ground, dasher to avoid attacks or to propel themselves forward, or “teleport” a short distance using dimensional rifts.

Because if we changed dimension at the beginning of the game, it’s because rifts appeared everywhere in the universe. Some of these cracks allow us to explore optional mini-levels, others will make hordes of enemies appear, and the rarest ones will simply allow us to change worlds.

So, in the middle of a fight (and sometimes during exploration), you can teleport a few meters to appear in another part of the area you are fighting in. It’s more anecdotal than anything else because there is no real “logic” to the fact that these rifts are there and not elsewhere, and it’s mostly to help us if we’re in trouble during a battle.

Instead of allowing us to teleport where we want with a Dishonored-like power, we are stuck with the 3 or 4 options offered on the field. This quickly becomes useless as our weapons do the job and the dash allows us to dodge all attacks (exactly like in Returnal by the way).

The presence of the rifts is finally fun when fighting some bosses where you will completely change the world for a few moments, but apart from the wow and innovative side, it is far from an essential feature for the gameplay.

As already mentioned, the game is not just a series of fights. We enjoy exploring the levels to discover all the little optional quests and get the bonuses that will increase the stats of our heroes or unlock original rewards.

On the other hand, we go round in circles if we do the optional missions at the same time as the main story and this “more advanced” exploration of the environments takes away the feeling of a huge universe that we have when we arrive in a world.

If the path followed by the main story is beautiful and full of details, what is next to it is not on the same level. Still, this is a feeling you can get when you go through the game from top to bottom, and not at all when you experience the adventure the game offers.

I advise you to live the story and come back to the planets to explore them again, even if it means taking advantage of the “new game +” option that allows you to start the adventure again with all the unlocked weapons and upgrades.

What I really missed in Ratchet & Clank: Rift Apart was the lack of difference in gameplay between Ratchet and Rivet. The ability to play as both heroes is not just cosmetic as the personalities are different and it gives us a life lesson throughout the adventure.

But it’s a shame to stop there. I’m going to be honest and I measure this comment: it’s hard to get past The Last of Us Part II. If I’m offered to play two different characters, I have to have an interest in the game.

Ratchet and Rivet have the same skills, the same weapons, the only thing that changes is the color of the interface on the screen and the visual of the hero. We could have had a triple jump for Rivet, or a particular game mechanic that uses the fact that she has a robotic arm.

Especially when you venture on a planet you don’t choose the hero you are going to control, it’s necessarily Ratchet or Rivet depending on the course of the story on the planet.

If the idea of seeing Ratchet sharing the poster with Rivet is pleasant, it is finally quite cosmetic and essentially scenaristic. She shares the cover of the box, but she does not appear in the name of the game. From Insomniac Games we could have expected a different work at this level, but the game is still aimed at a wide audience and maybe a change of gameplay with two characters in each level could have lost a lot of players.

It’s a missed appointment that would have been a nice “plus”, it doesn’t take anything away from the richness of the gameplay already proposed with the movements of Ratchet/Rivet and the weapons they have.

After about 10 hours you will have finished the main story if you play on normal difficulty. You have the possibility to increase or decrease the difficulty. It is also possible once the game is finished to activate options for more fun, like infinite ammunition or infinite life.

Apart from the story, the game is full of fun and original optional quests. It would be a shame to miss them.

Ratchet & Clank: Rift Apart is a wonderful action game where you explore original worlds in which fights follow one another. We could have enjoyed this gameplay experience on PS4 if it wasn't for the use of rifts which is quite anecdotal in the game. Nevertheless, it is a successful game with entertaining gameplay that it would be a shame not to discover on PlayStation 5 if you own this console. It's above all a beautiful, funny and accessible adventure. Translated with www.DeepL.com/Translator (free version)

Where is the score assigned to the game in this test? It's simple, there is none. We believe that the experience offered by a video game cannot be reduced to an arbitrary rating as complex as it is. We invite you to read the whole test and the verdict which give a fairly detailed idea of ​​the experience provided by the game.
Ratchet & Clank: Rift Apart PS5
News Amazon Micromania
PS5 Ratchet & Clank: Rift Apart
Date: 11/06/2021 | Genre: Action Plateforme Solo | Dev: Insomniac Games | Edt: Sony Interactive Entertainment
Buy on Amazon More posts 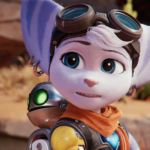 A book to decipher The Last of Us at Third Editions