Review / The Artful Escape: introspective, musical and psychedelic journey through the universe

Review / The Artful Escape: introspective, musical and psychedelic journey through the universe

A real UFO in the world of video games, The Artful Escape has just been released on Xbox and PC without a sound. It’s probably because it’s a game exclusively available in a dematerialized version that the general public didn’t follow the release of the title.

And yet, we could see it on many occasions during some showcases and I must admit that since the first day I fell in love. Developed by Beethoven & Dinosaur, a team composed of the composer Josh Abrahams and the programmers Justin Blackwell and Sean Slevin, the game is available since its release in the Game Pass.

The Artful Escape will take you to a part of the universe you haven’t seen before. You play as Francis Vendetti, a young folk musician who is the nephew of a late music legend.

As he is about to perform his first concert in a few days, our young hero (who is not a hero) is about to go through an existential crisis. Should he follow in his uncle’s footsteps or should he answer the call of music?

To answer this question, we will quickly move away from the small town where he lives to visit colorful and original planets.

All this obviously takes place to music, otherwise what would be the point?

With such an original theme, an unexpected gameplay was needed. The Artful Escape allows us to control Francis, our unknown guitarist. We move quite simply from left to right like in Inside or Super Mario.

If it is a type of movement which is usually used to make us meet obstacles where we will have to think to overcome them, here it is rather to allow us to contemplate at our speed the world which surrounds us.

Indeed, no enemies to fight, no complicated jumps or timing to have to pass a level, you move quietly (or frantically) through the levels.

After leaving Earth, Francis will have to travel to different planets to perform intergalactic concerts. It is thus armed with our electric guitar that we roam the fantastic scenery.

All we have to do is strum our guitar to accompany the sometimes epic, sometimes melancholic background music.

During our walk we will meet other human beings but especially aliens who have the particularity really original there too.

Far from the very human races in Mass Effect, we meet here beings with various forms, which communicate musically.

Of course, we don’t just walk around (even if it’s 75% of the game), we can also talk with a lot of NPCs. This allows us to discover a little more about our main character but also about the companions he makes during his journey.

To punctuate all this, Francis will do some musical improvisation sessions. It’s a bit like a mix between the Simon game and Guitar Hero since you have to repeat the notes played by our companion.

These simple sequences are very pleasant to play and you quickly get into the game of being a super star.

The Artful Escape offers a dose of fun to be experienced at speed, in a world so colorful that you don’t know where to look.

The simple basic story is accompanied by a really great narration. The dialogues are great and the sound ambiance is a little nugget that gives a spectacular color to the adventure.

I loved the atmosphere, the music, the art direction and the way you can personalize your character. Not to mention the choices you make in the story that bring you a little closer to the experience Francis is having.

It will take you about 5 hours to finish the adventure if you take the time to admire this totally crazy fauna and flora. You have to know how to stop, listen to the music, read the dialogues that you meet and enjoy this fantastic universe.

It’s a game like no other and it would be a shame to play it in a straight line without enjoying everything it has to offer.

The Artful Escape offers us a game different from the others. Contemplative but fun, in which we quickly get attached to our young musician who is looking for his place in life. We will find the answer to this question by crossing fabulous planets to the sound of our electric guitar and we will regret once the journey is over that we can't do the same in real life.

Where is the score assigned to the game in this test? It's simple, there is none. We believe that the experience offered by a video game cannot be reduced to an arbitrary rating as complex as it is. We invite you to read the whole test and the verdict which give a fairly detailed idea of ​​the experience provided by the game.
The Artful Escape PCXbox OneXbox Series X|S
News Amazon Micromania
PCXbox One The Artful Escape
Date: 09/09/2021 | Genre: Aventure Walking Simulator Solo | Dev: Beethoven & Dinosaur | Edt: Annapurna Interactive
Buy on Amazon More posts 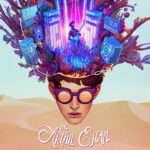 A new Midnight Black color for the Pulse 3D headset

The new Play Has No Limits ad from PlayStation is full of "easter eggs."