Nintendo today unexpectedly unveiled a new version for its portable home console. The Nintendo Switch OLED will bring some improvements for gamers who favor mobile use of the console, but still want to enjoy a higher quality of gameplay than the Switch Light, while retaining the ability to play on their TV occasionally.

Scheduled for release on October 8, 2021, the Switch OLED will cost $349 and will ship the following features:

The console will be available in neon blue/red and grey/black upon release. Existing accessories will of course be compatible. The new dock will be usable with the old Switch, which will allow you to update your games faster if your wifi is acting up.

Far from being the “Switch Pro” we thought was coming during E3, it’s simply an upgrade for mobile users with an OLED screen and that’s it.

It will be necessary to bet on the games in the Cloud to have access to more “current” graphics (4K?) when we will play on our TV like Control.

You can discover all the details on the Nintendo website. 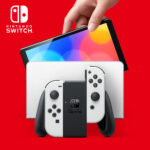 With the xScreen, the Xbox Series S becomes a "portable" console

You'll be dying to buy these Demon's Souls clothes