I don’t know about you, but I feel like I’ve been waiting for Narita Boy for 5 years, a bit like The Last Night, and frankly I don’t mind waiting even longer to let them create the game of their dreams.

This game all in pixel art where we will be able to fight via our techno-sword finally has a release date and complicated period obliges, it is quite close.

It’s a good idea (when we can afford it), to communicate the release date one month before the game, to make sure we don’t postpone it because of the problems we’re all encountering at the moment because of the many obstacles of the last few years (pandemic, climate problem and so on).

Narita Boy developed by Studio Koba is a retro atmosphere, cool graphics, all on PS4/PS5, Xbox One & Xbox Series X|S, Switch but also PC. Available from March 30th on the Xbox Game Pass (PC and Xbox).

I will obviously jump on it when it comes out, and I encourage you to do the same, although I haven’t tested it yet. Here is the new trailer released for the occasion. 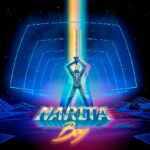 No collector's switch but Joy-Con for The Legend of Zelda