I can only thank the noclip team for giving me the opportunity to talk about Dishonored again. This license has given a new life to FPS by putting infiltration back in the spotlight, mixing skillfully powers and firearms, all in a lively universe where we wish we could get lost for hours.

I don’t know if it’s my background as a gamer or the little development I was able to do during my studies, but I always found Dishonored to be everything that makes a game a little more magical than others.

Giving us the opportunity to play in many different ways is a good point, but the team at Arkane Studios (Austin and Lyon) goes a step further each time. They allow us to play the way we want to play without guiding us or forcing our hands, and we often feel like we’ve managed to get off the “rails” of the game.

Even better, it shows us that the environment in which we venture evolves according to our actions and it gives us the impression that we have thought of all the possibilities we are offered.

The characters are alive, the cities are realistic, the daily life of the inhabitants is omnipresent during our exploration and we have a feeling that we usually find in RPGs whereas we are in an action/infiltration oriented FPS.

And this feeling is amplified by the freedom of movement in the levels, where you can move vertically using stairs but also most of the time a teleportation gift.

All this to tell you that noclip has made a documentary of almost an hour about the development of Dishonored 1 and 2. It features anecdotes about the production, and is a must-see video for video game lovers.

Dishonored 2 PCPS4PS5Xbox OneXbox Series X|S
News Amazon Micromania
PCPS4Xbox One Dishonored 2
While players begin and end the game in Dunwall, much of the story takes place in the coastal city of Karnaca, the capital of Serkonos that lies along the southern region of the Empire of the Isles, whose chief exports include silver.
Date: 11/11/2016 | Dev: Arkane Studios | Edt: Bethesda Softworks
Buy on Amazon More posts 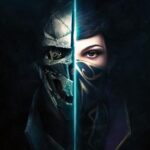 A hoodie for Deathloop at Insert Coin!

A new LEGO set for Spider-Man with the Daily Bugle