Review / Deliver Us The Moon: in space, no one will hear you save Earth

Review / Deliver Us The Moon: in space, no one will hear you save Earth

Since Wired Productions releases the collector’s edition of Deliver Us The Moon on PS4 and Xbox One this week, why don’t we take a look at this beautiful game that had landed on PC in 2019 and on consoles in 2020? Deliver Us the Moon is a game developed by Keoken Interactive, a Dutch studio that sends us into space for an adventure full of surprises. An appointment not to be missed for fans of science fiction for whom the sensations prevail over the action.

Earth is bad. We are far from an improbable scenario on this side and Deliver Us the Moon tells us about a topical subject. The inhabitants of this beautiful planet have exhausted its natural resources and they have found on the Moon a new “fuel” to save what can still be saved.

Rather than travel between the blue planet and its satellite, scientists have developed a technique to transport energy via a ray that connects the Earth to the Moon (basically, it’s the short version, let’s discover all this in-depth during your game).

One day, without warning, the ray is cut and the Earth is again deprived of energy. Without the possibility of reaching the lunar station, the planet is doomed to a swift and tragic end (in addition to sandstorms and global warming which has already taken its toll).

So yes, it’s got off to a bad start. With a scenario that starts like this, we already know that we are not going to travel the galaxy aboard a brand new ship, discussing with aliens while visiting the Citadel (I digress). It is not an RPG, nor a horror game, neither a walking simulator.

Deliver Us the Moon puts us in the shoes of a spaceman who is going to conquer the Moon with two missions in his pocket (yes, he has pockets in his jumpsuit). The first is to reactivate the flow of energy sent from the Moon to Earth, the second is to find out why this transfer stopped. In that order, or not, the important thing is to understand and save humanity. Okay?

For that, we will begin our adventure on Earth, in a launch base where we will have to organize our takeoff ourselves. The strength of Deliver Us the Moon is to integrate ourselves completely into the actions necessary for our space exploration.

We are told what to do, whether via an audio discussion or using diagrams hung on the wall, and we must then manipulate joysticks, engage buttons, .. We must manage for the devices that we have on hand works as expected, without having an indication on the screen which shows us “Pull the lever in the middle then press the button on the right”.

It is not an action game. We don’t shoot enemies, we don’t hide stealthy aliens, we explore, we admire and we solve puzzles.

It is not an action game. We don’t shoot enemies, we don’t hide stealthy aliens, We live the experience as our character. Alone, in space, without help, with our brain and our gift of observation as only allies, to solve simple puzzles which can seem quite disarming when we are used to being now very (and too) guided in video games.

The game mixes the view in the first person and that in the third person to stick perfectly to the game mechanics. When we walk in the station, we will have a view from above, for easy walking and moving objects. While the more complicated moments when it will be necessary to use interfaces will be done with the vision of our astronauts. A good idea that is used just right.

Another positive point is the management of space. We walk through abandoned buildings where only a few lights still hold up and we have to do with our portable lamp to explore the rooms that follow one another and which are not alike. We play a lot on the light, between the dimly lit interiors and the deserted exterior of the Moon.

This use of lighting helps give us a feeling of oppression when we venture outside. Low gravity, zero oxygen, cold light, the lunar excursions are not moments of vacation and we take advantage of these rare magnificent but scary moments at the same time.

Indeed, our character has a reserve of oxygen of 3 minutes for his outings. We quickly start watching the counter which tells us how much time we have left while performing the actions necessary for our survival as best as possible. We rarely get a second chance.

The game allows us to rummage around the station to find emails, notes and drawings, all in order to better understand the lives of the people who were on board but above all to understand what happened before. and after the power cut.

Visually realistic, the atmosphere is very well achieved through the use of sound just right. Some music from time to time but especially the sound management on the Moon which is perfect. This silence which sometimes accompanies us oppresses us and transports us in an instant to space.

It takes 4 to 5 hours to finish the game quietly, looking for objects scattered everywhere. You can always start the levels again after they are finished, but there is not much reason (except if you want to take photos) to start the adventure again.

Deliver Us the Moon allows us to experience the space experience in a more "realistic" and less "whimsical" way than most of the games we have that take place in space. We explore a lunar station, in search of the truth while quickly understanding where this quest will lead us. A great adventure to try!

Where is the score assigned to the game in this test? It's simple, there is none. We believe that the experience offered by a video game cannot be reduced to an arbitrary rating as complex as it is. We invite you to read the whole test and the verdict which give a fairly detailed idea of ​​the experience provided by the game.
Deliver Us The Moon PCPS4PS5Xbox OneXbox Series X|S
News Amazon Micromania
PCPS4Xbox One Deliver Us The Moon
Date: 10/10/2019 | Genre: Aventure | Dev: KeokeN Interactive | Edt: KeokeN Interactive Wired Productions
Buy on Amazon More posts 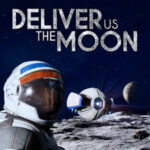 The Hydrant's Curse, a level inspired by Sea of ​​Thieves created by Daniel Green