A real scout for young talents, the publisher Annapurna Interactive is without any doubt the best source to make us discover a new facet of video games since a few years. It’s hard to name only a few of the games they have published when the whole list is composed of nuggets.

What Remains of Edith Finch, Gorogoa, Florence, Outer Wilds, Kentucky Route Zero or Ashen, original experiences that do not fit as easily as a AAA game into a trendy “genre”.

With Maquette, developed by Graceful Decay, we embark on a game that is not unique in its genre (Superliminal comes to mind for the gameplay), but where the story is a real driving force for the thought-provoking experience that the title offers us.

With Maquette, Graceful Decay takes us through Michael’s memories in an imaginary world. These are not just any memories, but the most important moments of his (love) relationship with Kenzie.

This is a game where you explore a universe straight out of Michael’s head, all in a first person view to allow for a better immersion. No combat, no encounters with other characters, we advance in the story by solving puzzles.

From the very first minutes of the game, the emphasis is on the narrative and not on reflection. Indeed, Maquette will allow us to explore a part of Michael’s life and for that purpose, during your wandering in our dream world, messages will appear here and there on the walls of the paths we will take.

Messages that reflect the thoughts of Michael, the unhappy narrator of his own life during our adventure. These text messages are quickly accompanied by audio scenes where we witness bits of life between the two lovers.

We appreciate the use of the first person view and the total absence of human representation of the two protagonists (illustrated by birds in the cinematics), which allows us to identify with the characters (if we want to of course).

The story unfolds in stages and the narration is well balanced. Not too much text, but not a long passage without a memory either.

Maquette offers an original experience in its gameplay because you are in a universe divided into 5 parts (in the shape of a cross). The central part has a small model which represents exactly the 4 other parts.

The idea is to be able to interact on the model by placing objects (a key for example) so that these objects appear in your real environment.

In short, if you take a key and put it in the model, it will appear in a much larger size in the real world. If you wish, you can take this key that has just appeared next to you, put it back in the model to make it appear even bigger…

If making a key bigger doesn’t seem to be very useful, you can make other objects bigger to use as a bridge for example. You can also make objects smaller or move them anywhere on the map.

The idea is “simple” and that’s what makes the puzzle part of the game so compelling. Like The Witness, it’s not by offering us 20 objects to solve a puzzle that we have fun, but by offering us an extremely simple puzzle visually, but complex in its resolution.

And in this respect, Maquette is a bit uneven. The puzzles are relatively simple and there are several ways of solving them at times, but suddenly they get a little more complex, without warning.

The story and the memories are not there simply to entertain us, they directly impact the “game” itself. Indeed, Maquette does not simply take place in the first level composed of 5 parts, but in several levels that we discover as we go along our adventure.

The worlds we encounter are the image of our memories, a funfair, a house, a park, Maquette invites us to go through Michael’s life in the good and bad times.

To accompany the game and the graphic choice that fits perfectly with the universe, we are entitled to a sound atmosphere in two parts. On the one hand, a very calm background music that follows us during our walk and our reflections.

On the other hand, each level starts with a lively music that boosts us to face the new challenges that await us.

Obviously, if the story of Michael and Kenzie is universal, the scope of the message offered by Maquette will be different for each player according to his own experience. One can choose (well, your experience will choose) to be a simple spectator of a comedy, or to relive one’s personal experiences, the time of a videogame adventure.

It will take you between 3 and 4 hours to complete Maquette, depending on whether you want to explore all the locations and discover all the texts that the game offers. You can dive back into the story but the puzzles will not change. It’s up to you to look for other ways to solve them if you feel like it.

The experience offered by Maquette is a successful mix of a cleverly told story and a succession of not too complicated puzzles. You want to discover the evolution of Michael and Kenzie's relationship, while knowing that you are heading for a far from happy ending. The game loses interest if you don't get hooked on the story.

Where is the score assigned to the game in this test? It's simple, there is none. We believe that the experience offered by a video game cannot be reduced to an arbitrary rating as complex as it is. We invite you to read the whole test and the verdict which give a fairly detailed idea of ​​the experience provided by the game.
Maquette PCPS4PS5
News Amazon Micromania
PCPS4PS5 Maquette
Date: 02/03/2021 | Genre: Walking Simulator Puzzle Réflexion | Dev: Graceful Decay | Edt: Annapurna Interactive
Buy on Amazon More posts 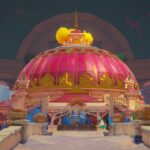 Hoa, a video game that reminds us of the universe of Studio Ghibli