In recent years Minecraft has established itself as an essential game on all platforms and after the takeover of Mojang by Microsoft we had not seen much change. This is now rectified with the release of Minecraft Dungeons, the first Xbox Game Studios game that comes out on all consoles of the moment (and on PC).

Minecraft Dungeons does not respect the gameplay of the original game: goodbye the need to mine and the need to craft. We are in a dungeon-crawler and not an open world. The hero that one incarnates will have to save the world in which one finds oneself from a tyrant who possesses magic powers. The game imprints on Minecraft’s visual style and part of its wealth of objects and enemies, but that’s it.

The story is made up of a series of levels, with a red thread and compulsory areas to cross. However, the levels will not look the same if you play them several times. Indeed, part of these levels is generated randomly. Ditto for the dungeons that you can unlock if you open your eyes carefully.

In Minecraft Dungeons, the entire gaming experience is based on loot. You gain weapons by finishing levels or by finding them in chests or on enemies, you equip them and start again. Our character gains experience, an experience that turns into skill levels and points. These skill points are used on our weapons (a sword, ax, pickaxe and bow style weapon) and armor to add passive abilities to our equipment.

Basically, your halberd with a power level of 7 has two magic slots. It’s up to you to choose how you want to improve it compared to the powers available in these locations using your skill points. If these don’t interest you, find another weapon! And if you no longer use your weapon, recycle it! This allows you to recover the skill points invested in this weapon to assign them to the new one.

You have to know not to get too attached in Minecraft Dungeons because a weapon cannot increase its power level. So you spend your time finding a weapon, equipping it, improving it with its magical powers and presto, finding another and starting over. Obviously the powers follow each other and are not alike, it is up to you to define your style of play and to find the right balance between your weapons and your armor.

In addition to your weapons, you can equip artifacts, which you can activate whenever you want. They recharge most of the time after a certain time or with the souls of enemies struck down during your adventure. Whether it’s a totem of protection, the possibility of summoning a wolf to support you or an amulet that turns your enemies into friends, you also have many choices available to you.

You can venture alone or up to 4 in the adventure, with the option to join a friend’s party at any time. Be careful however because if one of you is beaten, your teammates have only 30 seconds to revive you. Once this time is over, death is guaranteed for the whole team.

The levels are mostly made up of enemies who are waiting for you in strategic places where you have to pass. Sometimes you have to survive waves of bad guys, who have only one idea: to have your skin. There are several types of opponents with special abilities, which enriches the adventure.

It will not take you more than 4h / 5h to complete the main story. Obviously the goal of this type of game is to start over and over again the levels, increasing the difficulty to recover more and more powerful objects. When you launch a level you can select the difficulty precisely to adapt it as best as possible to your level of team power.

The scenario is not important here and it has been deliberately put aside if we compare to a Diablo. A simple story to focus on the game itself. No dark atmosphere or headache, we relax by tapping Creepers and spiders.

We regret the absence of cross-backup and cross-platform for the moment, forcing us to start our character again if we change platforms.

Armor style
9.5
My luck in loot compared to others
5
Unique weapons
8

Minecraft Dungeons allows us to have a good time alone or with friends, trying to get ever more powerful equipment through increasingly hard levels. It ignores the complexity of the usual stories to offer an accessible experience for the whole family. Ideal for an evening for 4 on the sofa, whether with children or with friends.

Where is the score assigned to the game in this test? It's simple, there is none. We believe that the experience offered by a video game cannot be reduced to an arbitrary rating as complex as it is. We invite you to read the whole test and the verdict which give a fairly detailed idea of ​​the experience provided by the game.
Minecraft Dungeons PCPS4PS5SwitchXbox OneXbox Series X|S
News Amazon Micromania
PCPS4SwitchXbox One Minecraft Dungeons
Unlike Minecraft, Minecraft Dungeons has no mining or building. Instead, it focuses on being a hack and slash-styled dungeon crawler, rendered from an isometric perspective.
Date: 26/05/2020 | Genre: Action Aventure RPG | Dev: Mojang Studios Double Eleven | Edt: Xbox Game Studios
Buy on Amazon More posts 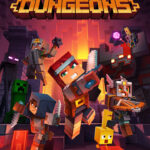