I’m going to give you some good news to start this weekend: there are only 3 months left to wait for the release of Cyberpunk 2077. Well almost. The game is currently still scheduled for November 19, 2020 on the current generation (PC, PS4 and Xbox One), playable day one on PS5 and Xbox Series X, but with an optimization patch scheduled only for 2021.

If you have the means, the adventure will undoubtedly be more enjoyable when released on PC, or then on next-gen consoles once the patch arrives. To make you wait, derivative products are emerging all over the Internet.

Fans of Johnny Silverhand, played by Keanu Reeves in the video game, can already get their hands on quite a few items. We are going to take a tour of the figurines and clothes that you can now order. SPOILER: There is a lot.

We start with the statue of Johnny Silverhand at McFarlane for 40$. This is a hand-painted figure of about thirty centimeters with the effigy of the hero in a rocker position, with his guitar. You can watch it on video here.

Then there’s the action figure again at McFarlane. This version is ideal for fans of photos who like to put the characters in situation. It costs only 25$, measures 18cm and it also has the guitar as an accessory, but also a bottle. There is a variant edition, this time with a pistol and a travel bag. You can watch it on video here.

We are heading to the 24cm figurine at Dark Horse this time. Here Johnny is armed with his pistol (in firing position) and his guitar (his inseparable companion). It takes 45 € for this mini statuette which at first seems really very cool. You can watch it on video here.

We obviously have a collection of clothes, available directly on the CD Projekt Red store. They are either in the effigy of Silverhand, or of his music group Samurai.

An improbable but completely inescapable object, the replica of Silverhand’s metal arm (a clue in its name). This reproduction is a quarter of the original size (that would be a bit creepy in actual size) and it costs around $ 60.

I know there are fans of Funko Pop, and this character will not escape the “tribute” of the brand with the big heads. It is now available for pre-order for 10$. There is a version with the sunglasses, and one without. It’s always better than the Totaku which is horrible (as usual).

There is the Arctis 1 Wireless Headset for Xbox at Steelseries. It looks great, compatible with Xbox One, Xbox Series X, PC, Nintendo Switch, and Android smartphones. Finally, we have a collection of accessories, improbable as usual but fans will appreciate it. Mugs, glasses, key chains, pins, magnets, and patches at Dark Horse.

As a bonus, I also share with you this cosplay (with a DIY guide) of Jonnhy Silverhand by Volsufrick. Now you can make her complete outfit, for your next subway ride or for playing in style on your sofa. 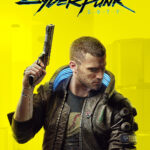