The philosophy of Xbox Game Studios has been clear in recent years with a strong will: not to let games die after their release. We have already noticed this with titles like Forza, Halo, Sea of Thieves, Minecraft Dungeons but also less successful titles like State of Decay.

The principle is simple: provide free content at regular intervals to make players want to continue exploring the multiplayer mode of a game (and sometimes the single-player mode as well), but also offer paid content for games that were released several years ago.

The best example of this is undoubtedly Halo: The MasterChief Collection, but Gears 5 isn’t being left out either. Released in December 2020 and optimised for the Xbox Series X, Gears 5 Hivebuster is DLC that adds a new playable story part to the original game.

Although this DLC is not free, Xbox had the good idea to include it in the Xbox Game Pass Ultimate when it was released.

Today we’ll turn to the OST of this DLC which is available for free online. Composed by Adam Lastiwka, the music takes us into a world quite different from the usual Gears of War atmosphere.

This change of composer breathes new life into the licence while using the most emblematic patterns of the series. Just listen to the track “Meet Hoffman” and the few notes will bring back good memories if you have spent countless hours on the first opus like me. 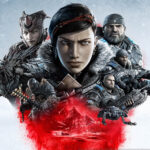 DoomCraft, a game that merges Doom and WarCraft