Demo / Outriders: hardcore action in single player and co-op up to 3

Demo / Outriders: hardcore action in single player and co-op up to 3

We knew the People Can Fly studio for their work on the Gears of War series and Bulletstorm, and it’s a brand new licence that’s back in the news. Outriders is a 3rd person action game that will allow you to play solo or in co-op up to 3 players.

We’re not going to do a full-scale test as I’ve only played the demo (which you can also get for free), but here’s what you need to know if you’re looking for your next game of the moment.

Outriders is a hardcore action game. You play as a soldier who has to survive and fight in a post-apocalyptic world that reminds us of a mix between Madmax, Rage and Borderlands (without the humour).

We can’t deny his origins and our hero reminds us a lot of the CGU in Gears of War, but it should be noted that he has spent less time in the gym and has a more realistic morphology (and armor).

You move around in semi-open environments where the battles follow one another. If it is not possible to jump, we can however take cover. A fairly classic arsenal of weapons is available to us, even if the demo gives us a glimpse of some interesting possibilities (with special abilities, but the full game will tell us more).

If at first sight the game seems classic, it takes a new dimension with its class system. You can choose from 4 “families” of powers, which will directly influence your play style.

For the demo I let my pyromaniac side do the talking and had to get some fire related powers to make the fights a bit more fun. You can test all the classes in the demo to get an idea, but you can also watch videos on Youtube if you have trouble choosing.

The philosophy of Outriders is apparent from the first battle: you have to play aggressively. Your life gauge doesn’t fill up with time, to gain life points again you have to kill enemies using your powers (basically).

This means that it’s not smart to stay under cover for too long, you have to be quick and clean up ASAP. And to add to this, there are quite a few enemies for each fight, and from the start you are treated to a variety of enemies, so it’s far from a walk in the park.

With this demo, it’s hard to get a clear idea of the game’s universe or the diversity of its bestiary and weapons, but we can at least form an opinion on the gameplay, which is nervous and offers a more aggressive play style than most co-op games.

To be tested alone or in co-op up to 3. In any case, I had a good time and the fights are really dynamic. 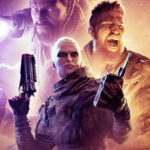