Preview / Peaky Blinders: Mastermind: an adventure where organization is the key word

Preview / Peaky Blinders: Mastermind: an adventure where organization is the key word

I watched the seasons of Peaky Blinders when I came across this year. Difficult not to be addicted to the acting, the achievement, and the atmosphere that emerges from the show. Obviously, when Curve Digital announced that a game would be released this summer, I was on fire. A little skeptical when the first images arrived, I jumped at the opportunity when I could get my hands on it.

Peaky Blinders: Mastermind takes place before season 1 of the TV series of the same name (Peaky Blinders). We are in charge of the members of the Shelby family in the beautiful city of Birmingham (beautiful, it is quickly said, it is still very poor and not in the best period either). The Great War has ended, and Tommy is going to take the head of the Shelby “gang” in a city where corruption, violence, and alcohol go hand in hand (especially for them).

The game respects the atmosphere of the series, whether for the characters as for the city and the sets. We can easily find the different places where the main plot takes place in the first seasons of Peaky Blinders.

The story is fairly basic but it is still in line with what the TV show offers us. An explosive cocktail where gang shenanigans mingle with police affairs.

As amazing as it may seem, Peaky Blinders: Mastermind is an adventure and puzzle game. A daring choice which ultimately corresponds entirely to what the series puts forward: strategy. Tommy Shelby climbs the ladder thanks to his attentive and inventive spirit which always has several strokes ahead of his opponents.

If the rest of his family does not have the same talents, it is around the faculty of Tommy that everything turns. The game takes advantage of this with an original mode of operation. We control the members of the Shelby family in the order we want to be able to carry out our missions.

Each character in the family has their own talent which allows us to move forward. The idea is to control each character “at the same time”.

At the bottom of the screen is a timeline that lists all of the actions you take with your characters. You can go back, pause or advance time while changing characters.

Peaky Blinders: Mastermind offers us to plan the missions and play them in real time at the same time. We end up spending 30 minutes on a mission, alternating the characters to finally achieve a 4-minute run where everything is beautifully tied up. We can then observe our characters chain the actions and move before our amazed eyes while exclaiming: it was I who did that!

You really feel the sensation of having organized the perfect shot, using each person’s special abilities as it should. There is even a feeling of oppression when the timer tells you that the end of the time is near.

Fortunately, you cannot “lose” during a mission. You can be spotted by the police, but you can always rewind at will. Whether it’s a few seconds to move the hero who has been detected, or squarely until the start if we started our mission wrong.

The complexity of the missions is increasing and if we start with one or two characters, we continue with more and more members to coordinate. On the other hand, we regret the lack of freedom that the game offers us. There are not 40 ways to complete a mission, we must above all find the strategy devised by the developers (which is logical by the way).

The atmosphere is really successful, with a graphic choice that suits the game. Visually, it is super clean. We find ourselves in no time in the pub of the Peaky Blinders, as if we were in the series.

Tommy Shelby
10
Respect for the ambience of the series
9.5
The graphic choice
8.5

Peaky Blinders: Mastermind invites us to live an adventure where strategy and organization are the watchwords. Far from the action and the spectacular battles, we take pleasure in making our mission go smoothly by directing all the members of our team "at the same time". Essential if you like the series, you will have a good time without having to have seen the TV show before.

Where is the score assigned to the game in this test? It's simple, there is none. We believe that the experience offered by a video game cannot be reduced to an arbitrary rating as complex as it is. We invite you to read the whole test and the verdict which give a fairly detailed idea of ​​the experience provided by the game.
Peaky Blinders: Mastermind PCPS4PS5SwitchXbox OneXbox Series X|S
News Amazon Micromania
PCPS4SwitchXbox One Peaky Blinders: Mastermind
Set right before the events of the first season, players will join the Shelby family's criminal organisation as they discover a sinister plot to put Tommy out of business. The game taps directly into Tommy's talent for planning complex scenarios in his head, with players forming strategies by taking control of key members of the Shelby family down on the ground.
Date: 20/08/2020 | Genre: Aventure Puzzle | Dev: FuturLab | Edt: Curve Digital
Buy on Amazon More posts 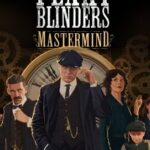 A Nendoroid figure for Triss Merigold from The Witcher